1. What made you choose Norway and Grieg’s music for Peer Gynt as the backdrop for The Storm Sister?

I was only five when my father arrived back from his travels in Norway, bringing with him a long-playing record of Grieg’s Peer Gynt suite. It really did become the background music to my own childhood, as he eulogized about the beauty of the country, especially the magnificent fjords. And told me that if I ever got the chance in the future, I had to go and see them for myself. Ironically, just after my father died, Norway was the first country that invited me to visit on a book tour. I remember sitting on the plane, my eyes brimming with tears as I flew to what he had called the top of the world. It felt that I too – just like Ally – was following my late father’s words. I have visited Norway numerous times since my initial journey there, and, like my father before me, I fell in love too. So there was little question of where the second book in the Seven Sisters series would be set.

2. What kind of challenges did you face in writing the second instalment of a seven-book series? How was it different to writing the first book, The Seven Sisters?

It was only when I set to work on Ally’s story that I actually realized the challenge I’d set myself in writing such a vast, complex series. Apart from writing Maia and Ally’s modern-day story, plus the huge amount of research on the historical sections of each book, I’ve had to make sure that the timeline fits accurately with the movements of the previous sister’s book. For example, if Ally has had a conversation with any of her sisters at ‘Atlantis’, each location and the exact words spoken have to be double-checked for timing and accuracy – never mind keeping tabs on the detail of the underlying ‘hidden’ plot that runs through the books . . . or the allegorical Greek references and anagrams that form the backdrop to the series. It’s a little like playing with a Rubik’s Cube – one line fits, but then another falls out of place. This series has stretched me cerebrally as well as creatively. I want each novel to be able to stand alone as well, so I’ve had to come up with interesting premises to explain the main plot line of Pa Salt adopting all the girls to new readers, without being too repetitive for those who have read the previous sisters’ stories. 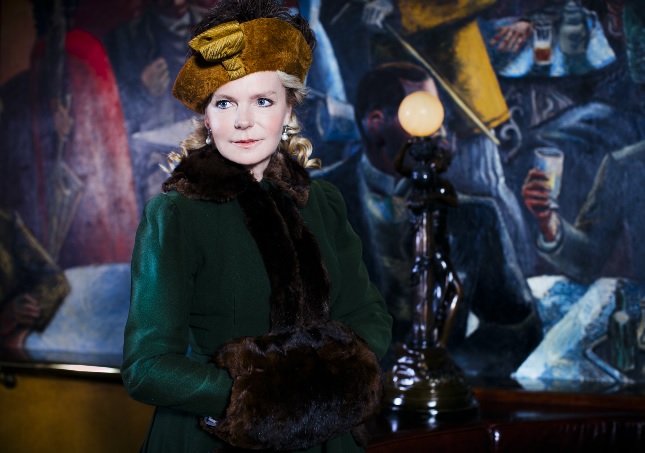 3. How did you approach the task of researching the historical events and iconic cultural figures from Norway that are featured in The Storm Sister?

The Storm Sister is based on real historic figures, such as Edvard Grieg and Henrik Ibsen, although my portrayal of these characters’ personalities in the books is purely down to my imagination, rather than actual fact. My fictional characters – in this case, Anna and Jens – are woven into the factual truth of real-life events.
My friends at Cappelen Damm, my publishing house, were instrumental in introducing me to the people I needed to speak to. And in fact, a lot of Ally’s fictional quest to discover her past was based on my own Norwegian journey as I searched to uncover the story of Peer Gynt and Grieg himself. Some of those I met on my research trip appear as themselves in the book and I thank them for allowing me to use their real names in the story.

Erik Edvardson at the Ibsen Museum was my first port of call. It was he who told me that Ibsen had asked Grieg to write the incidental music for his poem and showed me the original photographs from the production of Peer Gynt. Then he told me about Solveig’s ‘ghost voice’, whose real identity is still unknown to this day. This gave me the key to the ‘past’ story. The whole historical perspective of Norwegian life in the 1870s came from Lars Roede at the Oslo Museum.
I went twice to Bergen, and visited the Grieg Museum at Troldhaugen – Grieg’s former home – and was actually allowed to sit at Grieg’s grand piano! As always when describing real historical people, I try my best to do them justice, especially with someone as meaningful to Norway and the wider world as Edvard Grieg. In Bergen, I had the great pleasure of spending time with Professor Erling Dahl, the foremost expert on Grieg and recipient of the Grieg prize – who showed me around the Edvard Grieg Museum in Troldhaugen. I read as much as I could about Grieg and his contemporaries – and I pored over the details of the original production of Peer Gynt. Luckily, he was a prolific diarist and correspondent and there’s nothing better than reading the words that those historical figures have actually written. It’s the best insight you can get. And I always have to remember I’m a storyteller first, not an historian. I also met Henning Malsnes at the Bergen Philharmonic Orchestra, who explained the way an orchestra is managed on a day-to-day level, as well as the orchestra’s wartime history. And the renowned Norwegian composer Knut Vaage, who explained to me the process of orchestral composition with a historical perspective.

4. Now that you are on the second instalment of the series, has your overall plan for the ending changed or do you still have a clear end in sight?

The ending has been planned from the start. The secrets that will eventually come to light are all in my head. This hidden plot line run through the series and I have to ensure this is subtle and consistent through all the books. Only my husband knows the plot of the last book, though recently he said he’s forgotten it already . . . !

5. We not only see Norway, but we are also taken to the musical city of Leipzig in Germany. Did you travel there for research too?

Yes. It’s a beautiful city, on its way to being restored to its former glory. Germany is one of my favourite countries, and I have travelled there often to meet my readers. And of course, Grieg studied there for three years and Edition Peters, his music publisher – run at the time by a close friend called Max Abraham – is still based there. I often find I have strange coincidental experiences when I’m writing. Caroline Schatke, an old friend, contacted me to say she had just moved from Cambridge University to work for a company in Leipzig called Edition Peters, and that she was currently sitting in the very building I was actually writing about at the time. This company has been the publisher of Edvard Grieg’s music since it was written over a hundred years ago.

6. You touch upon the horrors of World War II in this book, as you have done in previous books. Why do you feel it is such an important subject to explore in your writing?

The Second World War happened less than eighty years ago. Most people today have relatives who were affected by it in some way. It is a dreadful rupture in our world history, and affects any novel set in any country between 1938 and 1945. I researched the history of Leipzig and the plight of its Jewish population, and I felt that the destruction of the statue of Felix Mendelssohn marked a pivotal moment, a ‘point of no return’ for the city. Learning about what happened in Norway was also eye-opening, as it is a theatre of war that often isn’t taught in history classes.

7. Have you always had an interest in classical music? And how has this shaped your descriptions in the novel?

I trained as a ballet dancer from the age of three to sixteen, so I have grown up with classical music all my life. Grieg’s Peer Gynt suite has always been one of my favourites – both ‘Morning Mood’ and ‘In the Hall of the Mountain King’ are such iconic pieces of music. Everyone would recognize both if they heard them; they has become so ingrained in popular culture, having been used (and abused) in so many television programmes and commercials, films, and even at theme parks. 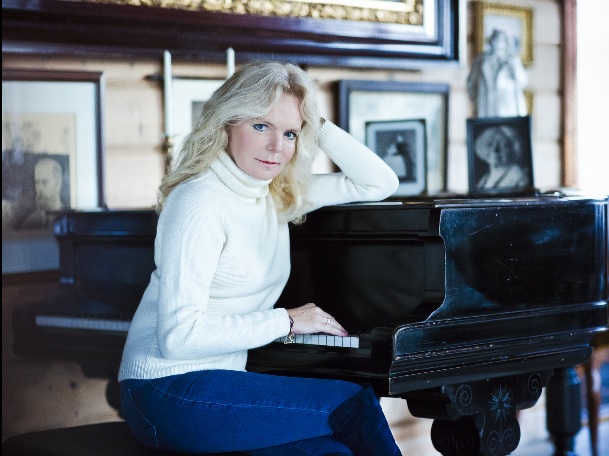 Sitting at Edvard Grieg’s piano at his home in Bergen, Troldhaugen.

8. What’s your best memory of Norway? Did you discover anything that made you change your initial plan for the book?

I absolutely loved travelling up to Trondheim and seeing the fjords and the snow-capped mountains beneath me from the aeroplane. My aim is to take a Hurtigruten cruise through them one day when I have time. But most of all, it was the people I met there. They were so warm and welcoming and it is always a pleasure to go back.

9. How does Ally match up to her mythological counterpart? What aspects of her did you modernize?

In Greek mythology, Alcyone, the second sister, was known as ‘the Leader’ and her star is one of the brightest in the cluster. During the ‘Halcyon days’, when the world was filled with joy, prosperity and tranquillity, her Greek namesake watched over the Mediterranean Sea, making it calm and safe for sailors. To reflect this for a modern audience, I made Ally a brave, strong woman who knows her mind and is a natural leader. She loves the sea and makes her mark as a sailor, but she also falls deeply in love with Theo Falys-Kings – which is an anagram of Alcyone’s Greek mythological lover, the King of Thessaly. The ‘Evil Eye’ necklace that Theo buys for Ally is a symbol of her being a protector of sailors. And it is when she has a forced separation from her love that her story leads to tragedy, just as in the Greek myth.

10. In this book, we find out a little bit more about the mysterious Pa Salt. Has it been a challenge to keep the ending a secret, and what have you made of your fans’ speculations on #WhoIsPaSalt?

I enjoy reading the different theories that readers come up with, and sometimes have a quiet giggle at them. I’m thrilled that my readers have been so captivated by the series and have been speculating so much on social media. Of course, nobody knows the truth except me (and my husband if he can ever remember it), and it hasn’t been a challenge at all to keep it a secret – it’s been great fun.

11. At the end of The Storm Sister, we catch a glimpse into the perspective of Star, the third sister. Can you give us a hint as to what her journey will contain?

Star is a fascinating, enigmatic character, and I’m enjoying delving further into her perspective. I am still writing her story, and it’s set in England. It’s been a change to explore my own country’s history and its various landscapes. And it’s meant I have been able to write from home, as I always have to live for a while in the country I’m writing about. Star’s story will take us from the wilds of Cumbria and the raw beauty of the Lake District to the excesses and social whirl of Edwardian London.

12. What would you like readers to take away from The Storm Sister?

I would like my readers to be inspired by Ally’s strength and positivity. Ally goes through so much in The Storm Sister. I can’t tell you how much I cried writing the Fastnet race scenes and especially Theo’s memorial service. Ally is an incredibly determined woman, and despite the amount of grief she endures, she manages to find a new source of creativity, a new home and a new family in which she can raise her and Theo’s child. Just as Pa Salt’s last words to her predicted that, ‘In moments of weakness, you will find your greatest strength’, I hope this is true for all of us. 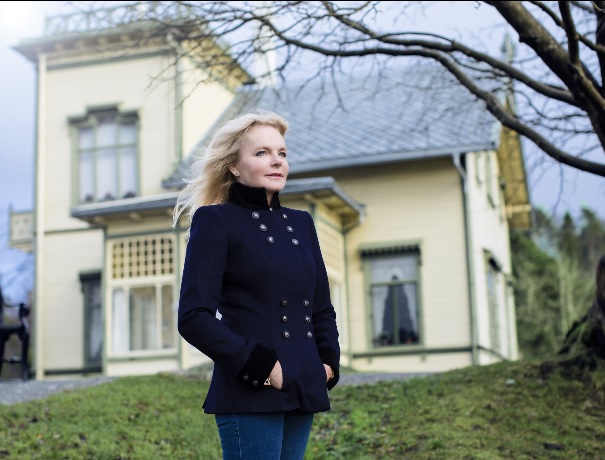 Outside Troldhaugen – Edvard Grieg’s home – which is now a museum